“I’m just a guy next door”, opines the titular character in JOHN DOE: VIGILANTE, played with a cocksure arrogance by the excellent Jamie Bamber. Although initial glances may shrug this off as another addition to the endless ‘Saaaaf Landon’ gangster brand, it is in fact a greatly impressive slice of Ozploitation.

Frustrated with a failing legal system that continues to allow violent criminals to go free, John Doe begins exacting justice the only way he knows how – by killing one criminal at a time. Soon he becomes a media sensation and inspires a group of copycat vigilantes, but who is the real John Doe – a pillar of justice or a cold-blooded murderer?

Taking his revenge upon such good-for-nothing members of society as paedophiles, abusive husbands and date rapists, I have to admit it was tough for even this pacifist not to elicit a subdued fist pump of satisfaction at Doe’s moments of reckoning. However, what elevates John Doe: Vigilante above the more conscienceless films of its ilk, is the deft way that the narrative is tackled with such diplomacy and intelligence; posing pertinent questions about such an emotive subject as retribution. With bold political statements, and a cutting indictment of the justice system thrown into the mix, Stephen M. Coates’ screenplay demands praise for bringing an astute dimension to a picture that could easily have settled for the lowest common denominator.

The next time I browse the forthcoming DVD releases, I fully expect every title to be prefixed with A Haunting at… as it seems to be the last bastion of faux-ingenuity by our increasingly lazy film companies. We still sell three hundred and twenty thousand DVD’s a day in the UK, so I don’t really think we’re looking at the last shot of whiskey just yet. I digress, but this week Hollow Creek morphs into A HAUNTING AT HOLLOW CREEK, with Scream: The Horror Magazine front and centre, calling it “A gripping and tense psychological horror”. With quotes like that you’d think they had actually seen the film.

What Hollow Creek actually is, is a well-made – if a little stilted – kidnap-cum-mystery movie, which sees Blake Blackman (Steve Daron) head to a remote cabin in the Appalachian’s to seek inspiration for his latest novel. During his self-imposed exile, Blake is accompanied by his secret lover Angelica (director Guisela Moro), who after her arrival is drawn into the curious case of some missing children. Drawn into the mystery of the disappearances, this romantic getaway quickly turns into a case of abduction, murder and the unravelling of a complex web of secrets.

At its core, there’s an intriguingly poised mystery to Moro’s film, one that would fit quite snugly into the mould of an ABC Movie of the Week – and I mean that with the greatest of respect. It has its faults, most notably in the form of one-dimensional characters, “You’re from New York? We don’t get tourists ‘round here”, states a local officer to give you some eye-rolling ammunition. It’s also a good twenty-five minutes too long, resulting in a noticeable loss of momentum towards the halfway point. Thankfully, a five minute cameo from the inimitable Burt Reynolds gives it the necessary shot of adrenaline, resulting in a surprisingly gripping final third.

I don’t know what the more curious thing is about North Bank Entertainment’s new movie, KILL KANE. Whether it’s the fact that Andrew Jones has vacated the director’s chair for the first time since Silent Night, Bloody Night: The Homecoming, or whether it’s the shock of a box office name headlining one of the company’s films. Okay, when I say box-office, I’m speaking purely from a DTV perspective – it is after all Vinnie Jones, but nonetheless, it’s quite a coup for the Welsh production company.

Assuming Jones’ megaphone is Sussex-born Adam Stephen Kelly. Still in his twenties, he started out as a critic, contributing to sites like Screenjabber and Aint It Cool, where he took the slightly goofy moniker of Brit Geek. After debuting on the filmmaking scene with the acclaimed short Done In, he took a position at Richwater Films which saw him credited as a producer on We Still Kill the Old Way and the mediocre Martin Kemp starring Age of Kill. Indeed, with a predilection for London-based gangster-grot, I did have a degree of reluctance to see just what Kelly would produce for North Bank; the result though is actually a surprisingly fair revenge picture.

Vinnie plays Ray Brookes, a family man who seeks revenge when his wife and children are murdered by infamous gangsters. Unable to place his faith in the justice system, and with nothing less to lose, he turns vigilante to stalk the streets and hunt down those who robbed him of a future. A simple narrative there, often the key to effective low budget filmmaking; what I was most curious about though was how North Bank’s minimal location horror set up would lend itself to the challenge of a revenge picture.

The result is pretty satisfying, albeit one that may well frustrate those who go into expecting a never-ending series of explosive action set-pieces. By weaving in prominent flashback sequences, Kelly is able to give the film a sturdy spine, which also draws the biggest criticism in that these scenes hold more interest than the revenge aspect of the film. They’re well written, tautly constructed, and overshadow what’s perhaps the major selling point – Vinnie kicking ass. Having said that, it’s a minor gripe that’s dictated purely by expectation, when in reality Kelly’s movie deserves praise for delivering a tight (seventy minutes) piece of micro-budget schlock that most of us DTV whores will find very pleasing indeed.

Finally, a brief word on Steve Oram’s AAAAAAAAGH!. I had read (almost) universal acclaim for this over the course of the last few months, all with the caveat that it is a bit of a marmite movie. This in itself seems odd, as how can a film that receives such fine notices be classed as a love / hate piece of cinema? Oram’s film is described as ‘a celluloid primal scream – an anarchic, hilarious, disturbing and touching look at the human condition’. If you didn’t know beforehand, this tale is told using entirely a language of grunts, gibberish and wild gesticulations – and I really hated the whole experience.

We’re all partial to a little onscreen ejaculation, defecation and penis dismemberment from time to time. Indeed, some of my favourite films contain all of the above! Here though, it just feels tiresomely puerile, with a determined intention to gross you out under the haughty mask of high-art; a winkingly knowing allegory of the human race if you will. Granted, with DTV Junkyard’s speedy turnaround between viewing to writing, it barely gives you time to digest a film fully. Therefore, you may catch me come December writing a fawning apology to Steve Oram, having suddenly seen the light with regard to the stunning artfulness of his movie. In the cold light of day though, I have nothing complimentary to say about this feature. 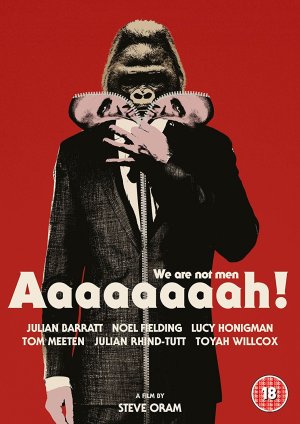