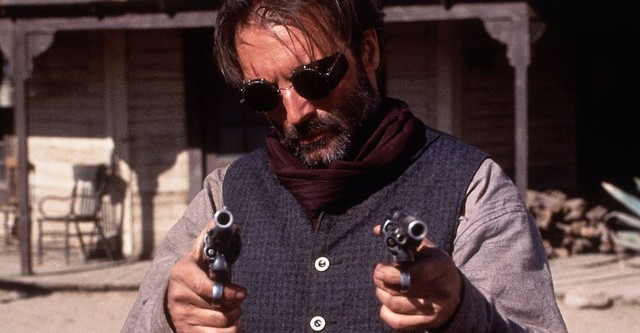 Dave dons his spurs and goes toe to toe with a visually challenged Armand Assante, with some help from director Richard Spence.

John Wayne hailed from Iowa, Gary Cooper from Montana, and Randolph Scott from Virginia, so the idea of a New Yorker taking the lead role in an oater isn’t one that’s too commonplace in the long history of the American western. However, with his olive skin and Italian heritage, Armand Assante fits quite comfortably alongside the genres’ spaghetti-christened counterparts – which is the exact reason why the Euro-flavoured BLIND JUSTICE works a treat.

Assante is Canaan: a mysterious gunfighter on the verge of blindness after years of Civil War combat. He roams through Mexico with a baby in tow that he’s sworn to protect. His destination is Los Portales, the home of the child’s new adoptive parents. During a stop-off at San Pedro, a U.S border town, he comes across a group of cavalry officers led by the beleaguered Sgt. Hastings (the excellent Adam Baldwin). The officers had been ordered to transport a shipment of silver, but now find themselves cornered by the nefarious Alacran (Robert Davi) and his stooges – yet they remain reluctant to utilise the services of the quick-drawing Canaan, who could well be the answer to their prayers…

Doncaster born director Richard Spence had spent the previous decade establishing himself in television through a number of high-profile dramas for each of the three main broadcasters. For Blind Justice, he balances the demands of his first Stateside production with aplomb, even if, as he admits, the opportunity was a bit unexpected:

“I had made a film called You, Me and Marley (1992) which was a film about joyriders in Northern Ireland,” remembers the director. “It went round the film festival circuit and picked up a few awards, and as a result of that, I was approached by an American agent to join an agency over there. Rather to my surprise, a few months later they sent me the script for Blind Justice. There I was in wet, foggy London, so what’s not to like about being offered a spaghetti western [laughs].”

“Straight away I began to do a few recces in Mexico, but HBO was fresh off the back of a few budget overruns down there, so we were asked at quite short notice if we could move it to continental America. There was a limited number of states to choose from, owing to the shoot coming in the late winter, so in the end we plumped for Arizona. That led to a hectic ten days where the Arizona Film Commission lent us a plane to fly from place to place and check out all the old western towns. The place we found was in the Superstition Mountains, and it hadn’t been used since an Elvis movie, many, many years before. It had the bones of a great location though, and just needed a few buildings constructed – notably the church which was of course blown up at the end.”

“By this time, they’d attracted Armand Assante to play the lead, and I was flown to New York to meet him. We had a good conversation, which then evolved into a pay or play deal.”

“I always wanted to do a western,” remarked Assante to The Fresno Bee shortly before the movie debuted on HBO. “Blind Justice appealed to me because the character isn’t a typical western hero at all. It’s more like a samurai film where the hero is virtually blind. He’s a seer of shadows. He sees shadows within people. Canaan is an idealist too, despite what he’s seen in the war, and despite what’s happened to him. He’s also capable of being a cold-blooded judge, jury, and executioner.”[1]

His referencing of the samurai picture is no coincidence. Blind Justice is a beguiling brew: part Mediterranean horse opera, part homage to the Zatoichi saga and Lone Wolf and Cub series. A nod of admiration is due in the direction of the films’ Irish cinematographer, Jack Conroy. A veteran of summoning cinematic scope from a variety of spaces (see: Jim Sheridan’s The Field (1990)), prior to Blind Justice Conroy had just finished shooting Sam Shepard’s vastly underrated Silent Tongue (1993); a western of similar themes and textures.

“That’s true,” asserts Spence, “but Jack had also just shot The Last Outlaw (1993) for Mickey Rourke and HBO, and that was certainly one of the main influences behind working with him. I thought he did some nice work in that. He and I were both foreigners of course, and along with Ian McElhinney brought about a slightly more European contingent to the movie. For the most part though it was an L.A crew – very sophisticated – but they were quite taken by the horse wranglers and this habit of chewing tobacco. Within three weeks they’d all adopted these masculine, tobacco-spitting, he-man personas [laughs]. It was a lot of fun.”

“Daniel Knauf’s script was in a pretty good state too, and it didn’t need a huge amount doing to it. That in itself is surprising, because as you know, some scripts will need a little work.”

A decade shy of him hitting his creative nirvana with Carnivale, Knauf is a writer who’s more recently been associated with churning out a host of comics for Marvel. There’s a synergy, then, in how Knauf purportedly drew inspiration for Blind Justice from DC’s Jonah Hex, specifically in relation to its Civil War background and Canaan’s snarling demeanour. That said, Knauf still paints Caanan with enough originality for him not to be a clone, and Assante’s contribution can’t be understated. The actor brings his usual intensity to the role and it’s a joy to witness.

Davi and Baldwin provide fine support, and Blind Justice‘s ensemble is rounded out by Elizabeth Shue, Ian McElhinney, Titus Welliver, a brilliant cameo from M.C. Gainey, and an early role for Jack Black.