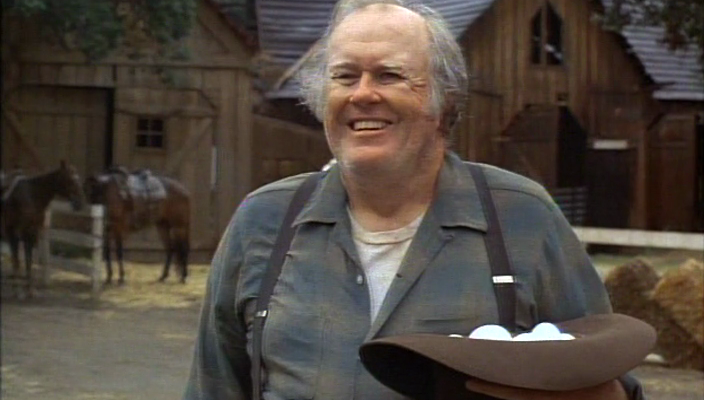 Dave ventures into the sweat-stained plains of the Lone Star State for some unscrupulous small-town shenanigans.

Despite the star-studded WILD CARD sitting comfortably in the realm of adequate USA Network TVMs, there’s room to pause for a moment and survey the fascinating life of its originator, Ted Thackrey Jr. A wordy obituary in Los Angeles Magazine in October 2001 referred to him as a peripatetic newsman from New York, who arrived in L.A with a degree of celebrity to his name [1]. Thackrey Jr.’s father had edited the New York Post, and his stepmother, Dorothy Schiff, owned that very paper. While living on the West Coast, his journalism career was dogged with plagiarism claims, but as a sideline he spent a period doing uncredited re-writes in the movie business. Indeed, with ‘Scobie Richardson’ gaining his sole credit for penning the teleplay of this adaptation of Thackrey Jr’s Edgar-nominated book Preacher, one might cast a suspicious glance in the author’s direction for the true screenwriter.

Powers Boothe plays Preacher: a one-eyed, eyepatch sporting, collarless shirt wearing, poker playing, former man of the cloth (“I believe in God alright. We’re just not speaking”). On his way down South, he stops in the town of Farewell in the Lone Star State and discovers that his old friend Owen Prescott has committed suicide. Something doesn’t sit quite right with Preacher about the whole affair, though, and he quickly uncovers a hotbed of corruption and murder in this hamlet situated two miles from the Mexican border.

Tony Scott, writing in Variety ahead of Wild Card‘s premiere on 28th October 1992, stated “The characters are flat, the action far-fetched, and the resolution obvious”, but I’d rein in the severity of that criticism. Granted, Happy Together (1989) director Mel Damski’s film is a little plodding at times, but I think that brings a welcome synergy with the sleepy pace of the Texas town in which it’s set. As for characters, they’re a well-crafted collection of disingenuous and unconventional residents. From Rene Auberjonois’ bourbon-swilling clergyman, to Terry O’Quinn’s wheelchair-bound mogul and M. Emmet Walsh’s computer savvy farmer – they’re an eclectic and engrossing assortment of eccentrics. However, dominating the picture is a rare (and excellent) solo lead performance from Powers Boothe. Watching Wild Card, you have to wonder if he hadn’t bumbled through a Screen Actors Guild picket line in 1980 to pick up his Emmy for Guyana Tragedy: The Story of Jim Jones (1980) whether more top-billed gigs like this would have been forthcoming.