Having never seen anything remotely wrestling orientated in my entire life (abandon me now loyal readership), my oddly placed enthusiasm for all things WWE Studios based seems somewhat peculiar. That said, their slate containing over thirty features is hard to ignore. Packed with a slew of recommendable action films, their steady DTV output perfectly quenches our thirst for good quality action-heavy bottom-shelfers. Filling the void left by the demise of the action star, here, the studio is the big attraction, casting interchangeable wrestlers-turned-actors in the lead roles with great success – both commercially and critically.

12 ROUNDS 3: LOCKDOWN is the perfect example of this practice. The franchise began way back in 2009 under the direction of action-helmer extraordinaire Renny Harlin, with John Cena in the lead role, fighting to rescue his kidnapped girlfriend. Sequel specialist Roel Reine was handed the reins for the second film, where Randy Orton played an EMT caught in a deadly cat and mouse with a vigilante, while for the this current picture we find Jonathan Good aka Dean Ambrose front and centre, with Stephen Reynolds carrying the megaphone.

Fresh from the wrestling ring, Good makes his feature debut here, and if there was any concern over his acting potential, such fears should be allayed by the presence of Reynolds; the helmer being the only filmmaker so far to make a movie starring Danny Dyer that didn’t make you lock your medicine cabinet and hide the key beforehand – the 2013 revenge flick Vendetta.

In 12 Rounds 3: Lockdown, Good plays John Shaw, a detective returning to active duty following the death of his rookie partner. After uncovering evidence that implicates a group of highly regarded fellow officers to murder and corruption, he finds himself being hunted down within the confines of his own precinct. Shaw will do whatever it takes to ensure that justice is served, but with his colleagues on the hunt, and with only twelve rounds in the clip, it’s a battle for survival.

With a distinct vibe of Assault on Precinct 13 mixed with a smidgeon of gritty TV show The Shield, Reynolds film ticks the all-important DTV box of wasting little time on laboured exposition, as events hit top gear early on. Good is remarkably decent here, but there’s excellent support from Roger R. Cross as Burke, a one-time ally of Shaw who apportions blame purely on his shoulders for the tragic events that occurred to his partner. It’s also great to be reacquainted with Lochlyn Munro up on screen, remembered so fondly for cool turns in Dead Man on Campus, Scary Movie and Freddy vs Jason.

Yes, it’s clichéd. Yes, you will roll your eyes repeatedly. Yes, it has plot holes as wide as the gap in Larry Fessenden’s front teeth…. BUT, 12 Rounds 3: Lockdown is the kind of prime DTV fodder that we schlock-lovers lap up with glee. Tightly directed and bursting with wall-to-wall action, it’s a welcome New Year highlight following December’s dearth of straight to video goodness. 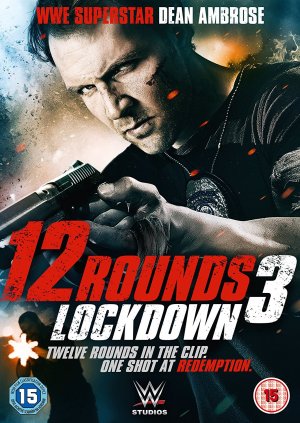 A cursory glance at the Zombie Hamster inbox a few months back revealed an opportunity to jump about the PR bandwagon for THE VATICAN TAPES. Of course, considering ZH’s scrupulous independence, such advances were politely rebuffed in favour of purchasing a copy of the movie on the day of release. That way, you see, we’re not tied to glad-handing film companies in return for interviews and publicity materials. We’ll leave other genre-based websites to fellate the suits, while we focus on delivering honest, unbiased assessments, unswayed by freebies and the tiresome allure of cover quotes.

This above paragraph will likely lead you to assume that The Vatican Tapes does not come recommended, and you’d be right about that. It begins with a little information about The Vatican’s relationship with what it deems to be ‘unexplained evil’, informing us how since the early twentieth century, many of these incidents have been captured on film. This preamble takes us into Angela’s story, where we discover that this seemingly normal woman (played by Olivia Taylor Dudley), is beginning to show signs of unusual and disturbing behaviour. Such bizarre conduct causes concern amongst her father (Dougray Scott) and boyfriend (John Patrick Amedori) – both of whom she lives with. Her descent into a coma and subsequent miraculous recovery escalate their fears, and before long, hospital chaplain Father Lozano (Michael Pena) feels the only solution is to dial the exorcist hotline.

Possession-based horror has undoubtedly saturated the market of late. As Matty pointed out a few weeks back, you can’t go into any retail outlet without box art featuring some poor girl in the throes of an exorcism catching your eye, which is why it’s vitally important to at least bring an element of ingenuity to the subject. The Vatican Tapes however, just feels like the death rattle of an exhausted sub-genre. I must admit, Mark Neveldene’s last two films haven’t exactly serenaded me with their brilliance – the Gerard Butler starring Gamer, and the woeful Ghost Rider sequel – but here, there’s an absence of any kind of inventiveness.

It’s shot very distractingly for a start, with a nonsensical blend of handheld and regularly shot footage, while the narrative feels so disjointed and hastily assembled. Major events seem to be given a minimum amount of screen time early on in the movie, while seemingly irrelevant details are laboured upon. It’s a shame, as for the most part it’s a really well cast film with Taylor Dudley, Scott and Amedori delivering some tidy performances. The film is rounded off predictably with the ubiquitous exorcism sequence, which despite its intention to thrill and terrify, only succeeds in becoming a useful substitute for your nightly dosage of benzodiazepine.