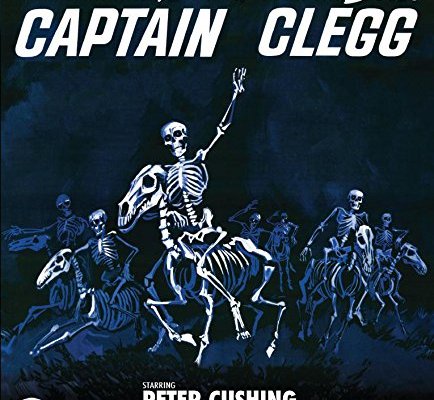 In the past few years Final Cut Entertainment have been quietly going about their own business releasing some iconic Hammer films into the UK market. Beginning with The Curse of the Werewolf (1961) before moving on to a nifty dual format release of The Brides of Dracula (1960) and then The Evil of Frankenstein (1964), their releases were coming slowly but the quality was there for them to stand out. Last month however they upped their game with the release of The Shadow of the Cat (1961) – an overlooked and often forgotten entry into the Hammer canon, while only four weeks later we have cause for further celebration with the issuing of Captain Clegg aka Night Creatures. That alternative title that Captain Clegg boasts has a fascinating history to it, and one that’s rooted in the 1950s and a certain novel by an iconic author.

In 1954 Richard Matheson published his novel I Am Legend which as expected captured the attention of a number of film companies not least Hammer. In 1957 Hammer bought the rights to Matheson’s novel and hired the author himself to pen the screenplay. The title that the forthcoming film was to be known by was Night Creatures. The British Board of Film CENSORS as it was then made Hammer aware of their disapproval towards the project and insisted that if such a film was ever produced, it would be immediately banned. Needless to say that with this threat Hammer dropped the project, but a slight issue lay in the fact that they had already promised their overseas distributors – specifically Universal, a title by that name. Universal loved the title, but now Hammer had no film to pair it with.

A surprise hit for Hammer in the early sixties was the swashbuckler The Pirates of Blood River (1962) and they were keen to quickly capitalise on the film’s success with a similar niche title. They saw an opportunity with an obscure 1937 pirate movie called Dr. Syn, for which they felt they had secured the rights via the purchase of the Gaumont back catalogue. At the same time however Disney had grabbed the rights for the same film albeit by negotiating directly with the author of the source material, Russell Thorndike. With an impending battle for the rights on the horizon, the resulting agreement came down quite amicably to the simple agreement of a title change on Hammer’s behalf and Night Creatures was born.

Captain Clegg (its British title) begins in 1776 where we see a punishment order signed against a mutinous crewman who is left to consider his actions on a deserted island minus his tongue. A few years pass and we find ourselves in the quaint English coastal town of Dimchurch which lies in the vicinity of the Romney Marshes. Captain Clegg is resident in the village as well, albeit six feet under in the local cemetery. War with France is on the horizon, but the residents of Dimchurch seem more concerned with their nocturnal activity of smuggling. This picture postcard town harbours more than these nefarious goings on, for it is supposedly haunted by ghosts known as ‘The Marsh Phantoms’. The Royal Crown however is more concerned with the piracy and they send their man Captain Collier (Patrick Allen) and his crew to investigate, but as expected the macabre element of this locale may make this a more challenging assignment than expected.

I’d not seen this film before due to its lack of availability in the UK, and because of that you tend to be a little dismissive to the degree of “well if no-ones released it, it can’t be that good”. With Captain Clegg though I must admit it’s a truly enjoyable film that sees Peter Cushing in a role in which he plays to perfection, while Patrick Allen as his foe is perfectly suited to his stiff hierarchical character. This DVD edition (also available on blu-ray) is a great credit to Final Cut who have released it with some fascinating extras. First up we have a 31 minute self-produced ‘making of’ featurette which is just great. It traces the history of Dr.Syn through Russell Thorndike to Michael Carreras who fancied the project for Hammer. There’s some great documentation of Peter Cushing’s treatment of the script, as well as a glowing tribute to his professionalism. Elsewhere in the featurette we learn about the supporting cast for the feature as well as some of the more interesting members of the crew, not to mention some key location trivia. The other special feature on the disc is a brief but interesting piece on George Mossman, a carriage collector who provided replicas and originals to the British film industry.

This film manages to integrate so many things that Hammer are renowned for. From lush costumes and sets to perfect locations to an underlying menace to the cream of British acting. All these ingredients provide us with a movie that fits seamlessly into Hammer’s legacy, and it defies logic just how this title has stood on the periphery of their catalogue for so long. Credit then to Final Cut Entertainment for dragging this film into the UK market, moreso for taking the time and expense to throw some informative extras on to it as well. This is a shoe in to add to your Hammer collection, and you should really bookmark Final Cut too as they’ve got The Phantom of the Opera (1962 – part of the original double bill with Captain Clegg) up next with more great classics to come.